All black kitchen in a top chef's kitchen

Jouni Rahikainen and his spouse renovated their kitchen in the spring of 2017. Jouni had been contemplating the materials ahead of time, but when the renovation was in fact about to begin, he enlisted the design help of his brother who works as a movie set designer. Together they planned the kitchen down to its final details to create a dramatically dark and functionally compact space. 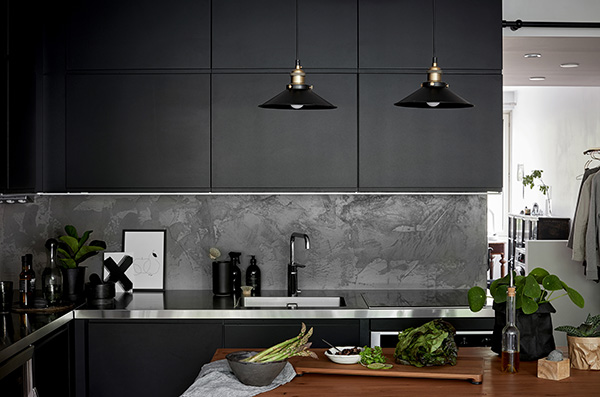 Chef Jouni Rahikainen has travelled the world working in respected restaurants in Australia and Great Britain to name a few countries. After returning to Finland in 2010 he has worked at the distinguished restaurants Muru and Kämp and now is a partner not only in his own catering company but also in the restaurant on Lonna island. Jouni can also be remembered from the Top Chef contest of season 2015, when he reached the top four.

What was the initial cause for the renovation?

-    The house we live in was built in 1961. The apartment hadn’t been renovated on in years, so when the pipes needed renewing we decided to renovate the whole apartment at the same time. This way we could kill two birds with one stone, says Jouni.

The arrangement of rooms could also be changed during the renovation, the kitchen is now located where the walk-in closet used to be and the bedroom was relocated to where the kitchen previously was. All the needed pipe work was easy to have done simultaneously to the pipe renovation, since the flooring was replaced anyway. Now the apartment floors are finished with a timeless beauty, the classic fishbone parquet.

The old kitchen was a “depressing cubicle” which didn’t inspire cooking at home according to Jouni. 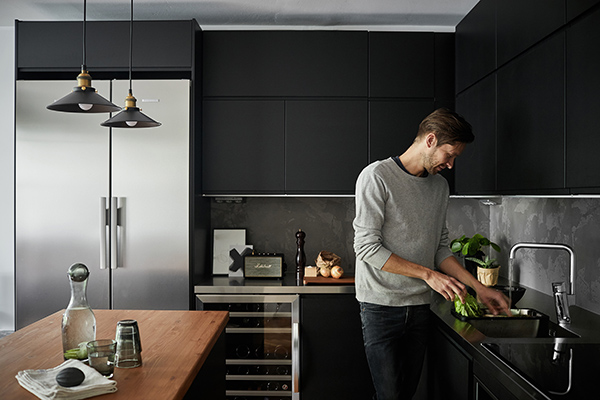 -    Now that the facilities are up to standard, I’ve cooked at home as well, he laughs.
The kitchen renovation proceeded very straightforward when the vision of the new kitchen was clear. The dark cupboards were found in the kitchen collection of Domus and the appliances were from Gigantti. The kitchen renovation was completed by Jouni himself with the assistance of his father, while the professionals only took care of the plumbing and electric work.

While designing the new kitchen, Jouni’s first decision was to have all counter tops and appliances in stainless steel. With years of experience in commercial kitchens they were an obvious choice, because stainless steel worktops are not only durable, but hygienic as well and they age beautifully and evenly. Along the two long walls are two long stainless steel Stala worktops and for the island which also functions as a buffet counter, massive wood was chosen to bring some warmth amongst the dark elements. 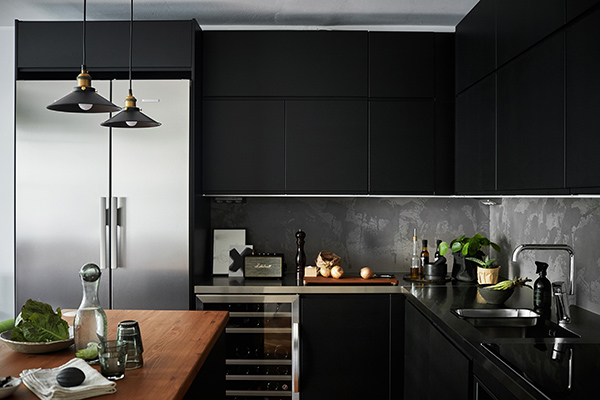 For the backsplash Jouni envisioned a surface with a worn look, for he didn’t want the traditional glass or tiles which need constant cleaning. Concrete has a worn look to begin with and it is easier to keep clean once you’ve given it a protective coating. Jouni spread the concrete himself for he wanted it to be a bit alive and not too even. His own handy work can truly be seen in this kitchen.

-    The professionals doing the renovation wondered this solution and asked whether I would top the concrete with some paint or tiles, since they did not believe I would leave it so rough, Jouni describes.

How long did it take for the renovation to be completed and are you satisfied with the results?

-    The pipe works lasted over 4 months in our building, and then the kitchen renovation to top it off, so our home was under construction for about half a year. We had planned everything very carefully so no unwanted surprises came up and we are extremely satisfied with the outcome, says Jouni with a smile.

Now that the renovation is happily completed, again a whole wall full of homegrown herbs, which Jouni’s spouse takes care of, can be found in the home. The shelf built up against a window is home to a variety of different herbs, tomatoes and a mandarin tree, just to name a few. Jouni has a food philosophy in which good quality organic products from the surrounding area should be used in cooking as much as possible. His own home garden supports this philosophy well. 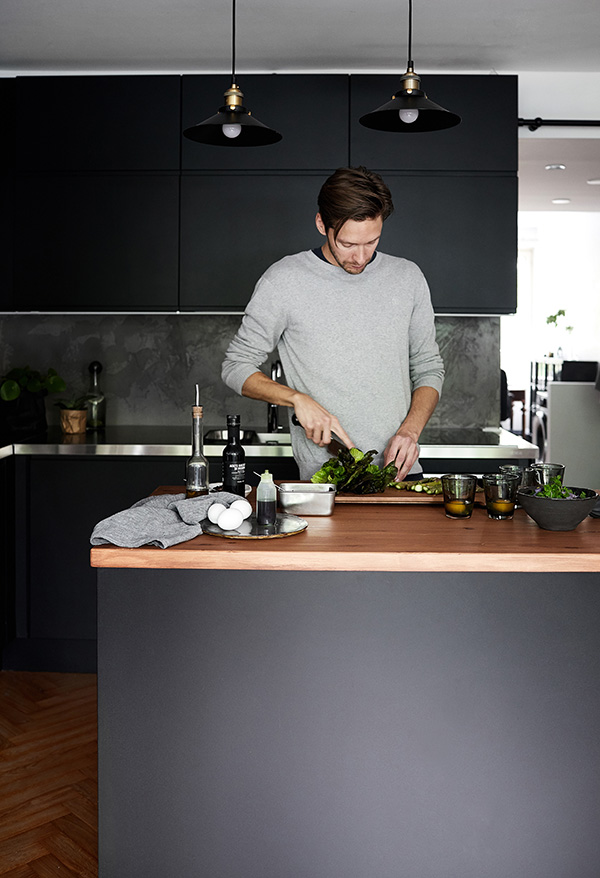 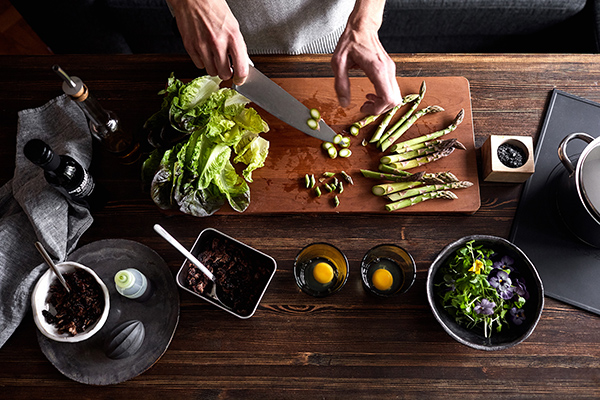 Wash and chop the lettuce, or leave it into bigger salad leaves. Fry the asparagus on a pan with some oil for a few minutes, season with salt and pepper.

Heat up some water to boil in a pot and add some salt and a good amount of vinegar. Pour the eggs into boiling water and cook for about 2,5 minutes. Lift with a ladle and let them cool down a bit.

Stack all ingredients onto a plate and decorate with the edible flowers. Dash some oil or vinaigrette on top according to taste and enjoy! 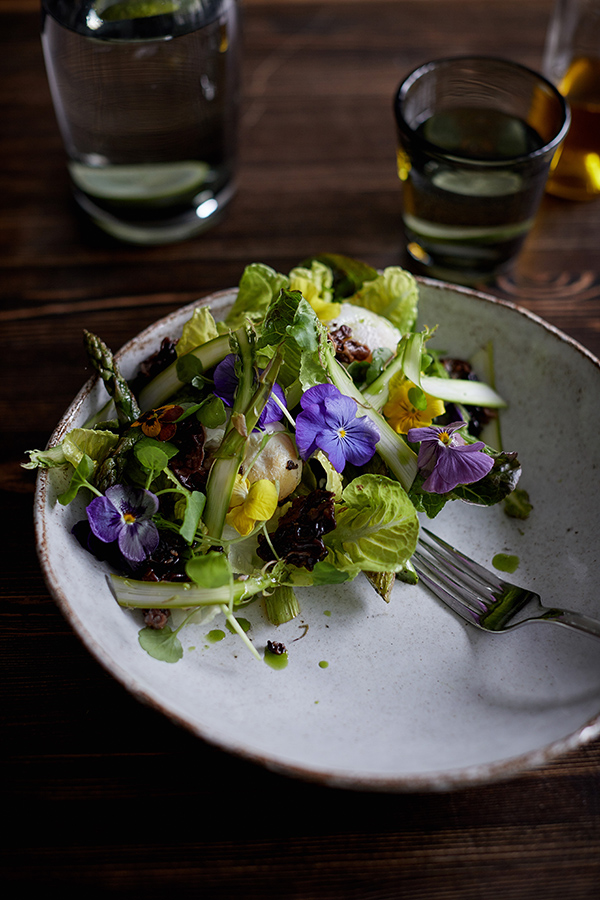