Sometimes resilience and determination are rewarded with unique and outstanding results. This is what happened when a couple renovated the kitchen of their 90s’ terraced house in Espoo. This project allowed Stala to show its unique steel expertise and prove the potential of steel as a material.

As you enter the apartment, your attention turns immediately to the peaceful sea view. Soft sunlight of early spring floods into the kitchen through the large windows and forms playful patterns on the steel surfaces. In this kitchen, steel has been heavily and uniquely used as a surface material from the island and floating worktop to cabinet doors. The execution and overall look of the kitchen are impressive and elegant. The road to innovation is not always straight. In fact, this magnificent result would not have been possible without resilience and faith in one’s unique vision. 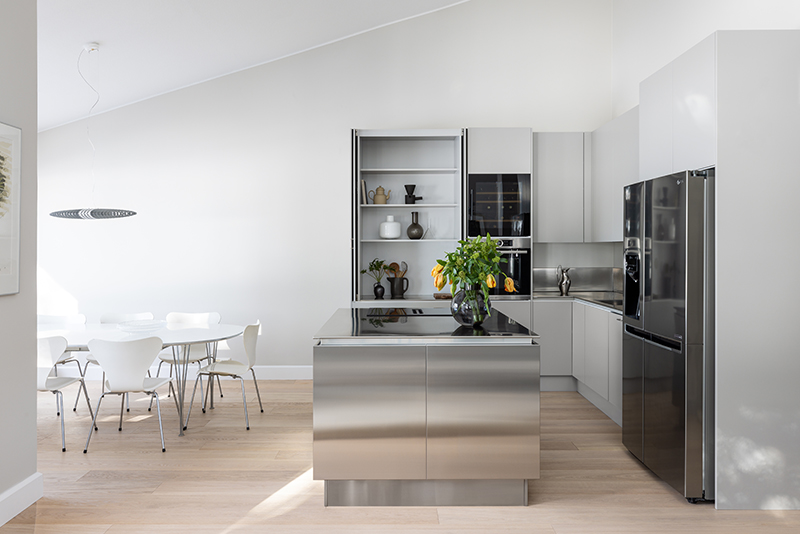 You cannot help but fall in love with the harmonious end result.

Steel had been heavily used in the execution of the original kitchen and inspiration was drawn from, for example, the Scooper ceiling lamp designed by Ingo Maurer. The concept was also inspired by styles and solutions discovered on social media and in foreign countries. Full-steel islands are rather rare, and most of the examples of such solutions came from kitchen concepts designed by designers established in New York or Copenhagen. The couple had a strong aesthetic vision of the use of steel in their kitchen. The couple’s closest family was involved in the design process and helped the couple decide between brushed and bright steel. The final decision was made based on material samples: bright steel was too reflective and light could not be directed towards bright steel surfaces. Bright steel is also more delicate than brushed steel. 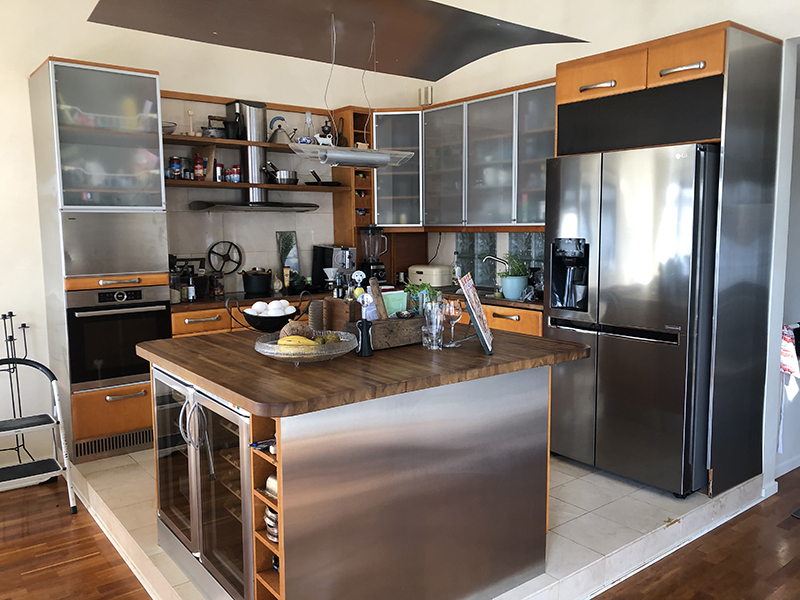 A 25-year-old kitchen in need of an update. Steel was already an important element in the kitchen. The material was used, for example, in the tall side panels, island and ceiling lamp.

After the establishment of the strong vision, the only thing missing was someone to realise it. Finding a suitable supplier was not easy but, in the end, Blau was chosen as the partner for this project. Some supplier candidates claimed that steel panels of this width are not manufactured and some were prejudiced against the concept of a full-steel island. Prejudiced ideas of steel as a cold and clinical material gave rise to some tart comments, such as: “Why would you want something like that?”. Some candidates suggested replacing steel with thick stone worktops.

Steel worktops have become more common in modern kitchens, but this couple wanted a tailor-made worktop solution. They wanted a seamless and neatly bent back board and a large sink. Stala was able to realise these wishes thanks to its strong expertise. 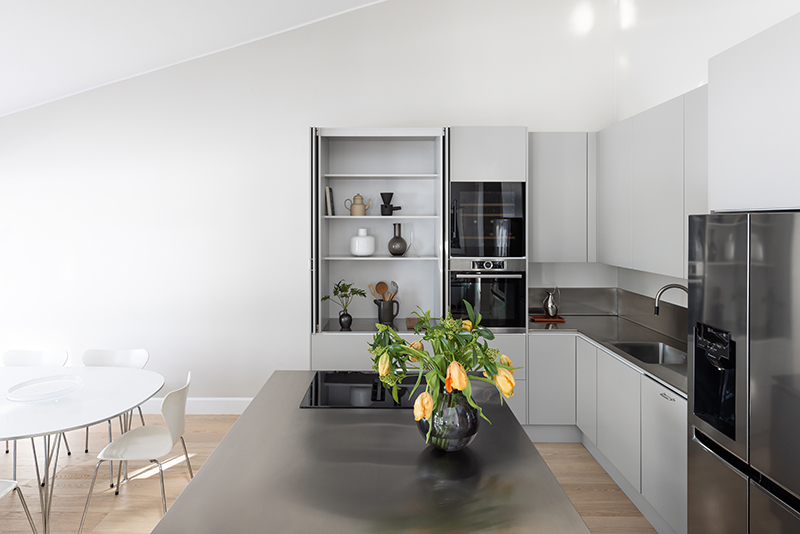 The 20 cm tall back edge and painted backsplash have been a positive surprise and functional combination. The steel back panel does not stain and it is easy to wipe.

Worth it in the end

After suitable project partners were finally found, the actual renovation began. The project did not progress smoothly and ended up prolonged, and the team became very familiar with the local diner and used to cooking on the balcony. In the end, resilience and strong faith in the vision were rewarded with a carefree kitchen that is easy to clean and where cooking is fun. 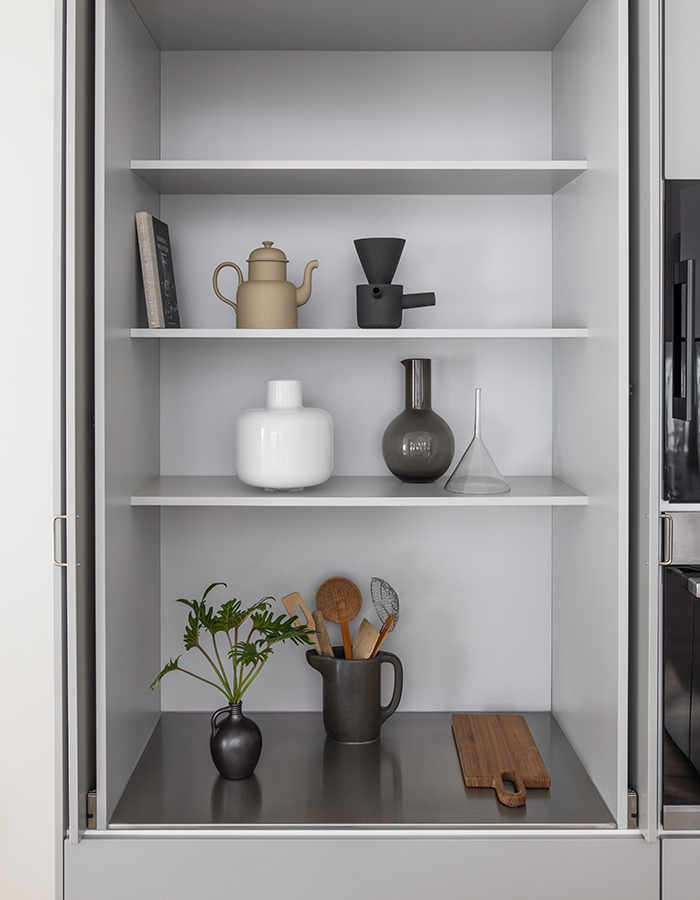 The bottom shelf of the breakfast cabinet is also made of steel. Making coffee is carefree when you do not have to worry about staining splashes.

The island is extremely multifunctional. It has plenty of room for cooking and the steel doors conceal convenient storage solutions. In addition, the island plays a key role during social gatherings: you can either sit around the island or use it to serve snacks and drinks. 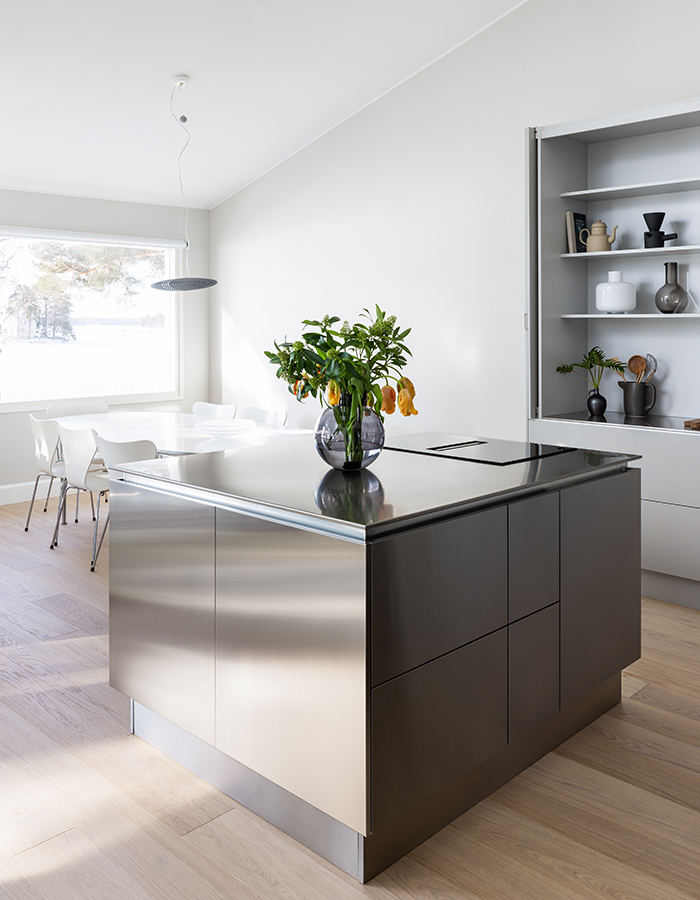 The steel island became the heart of the home and both family and friends enjoy gathering around it. 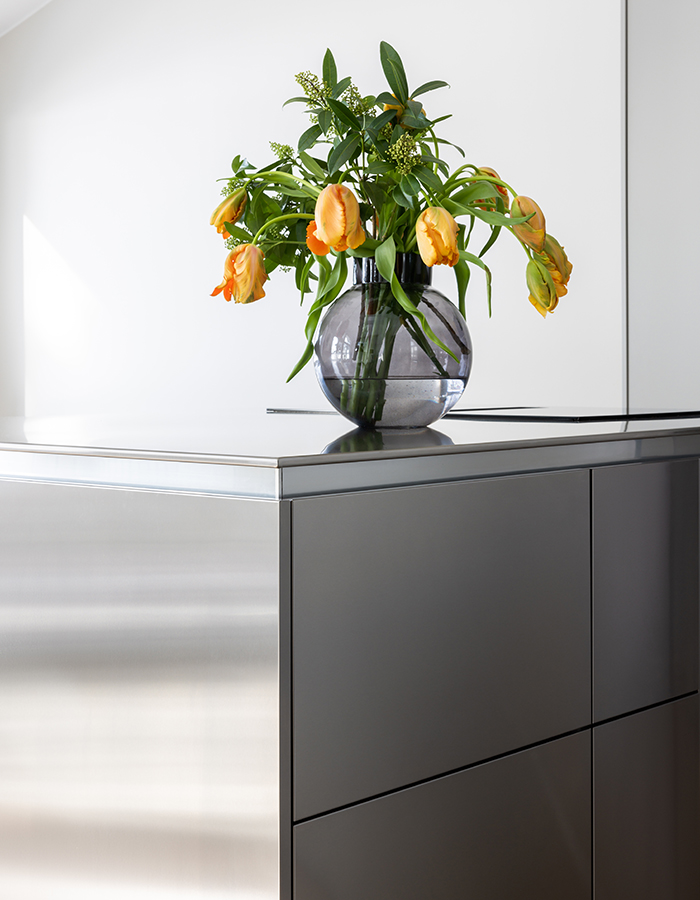 The floating worktop was a purely aesthetic choice inspired by kitchens seen abroad. 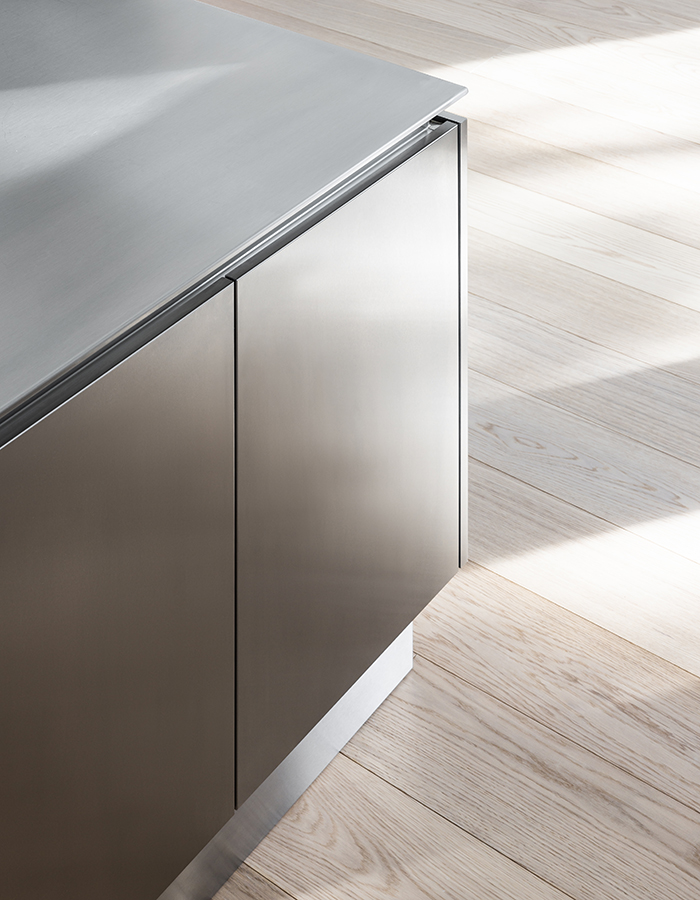 Combined with wood and natural light, the steel surfaces could hardly be called cold and clinical.

The eventful kitchen renovation was concluded successfully and the couple can finally enjoy their beautiful and functional kitchen. The couple’s renovation project continues, but at least the most important part is now finished. 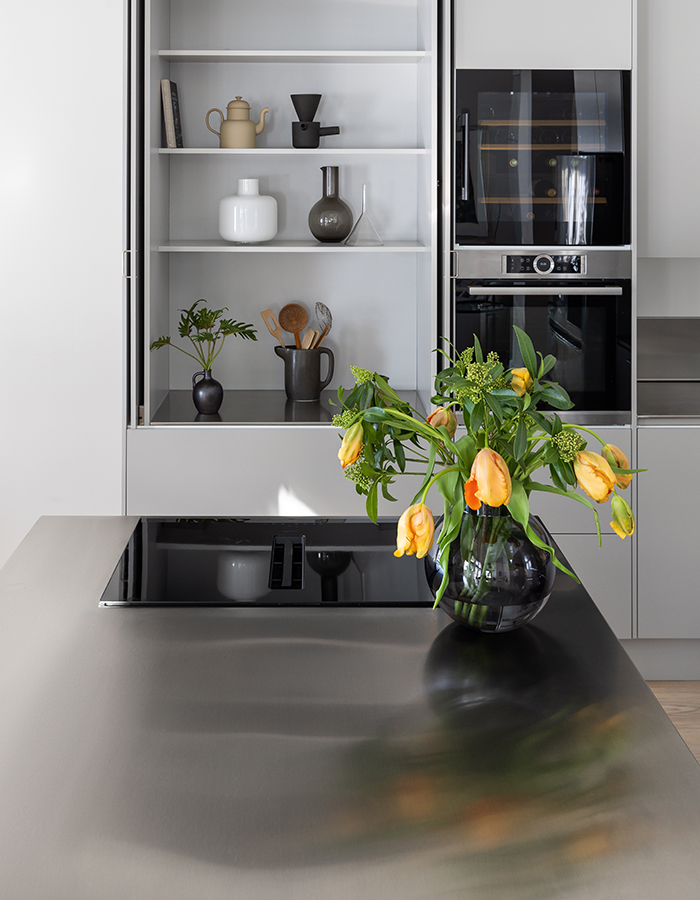